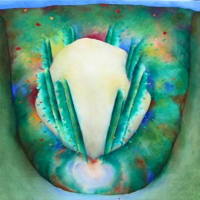 Ruth Blackwell Rogers describes her painting and environmental activism as “all one thing.”

“My paintings have always been trying to make visible in some way… that everything’s connected. The spirits of the trees, the highland bogs, the beavers, the river are all alive. And if we are aware of it, we know we are all dancing together,” she said.

Blackwell Rogers says her spiritual connection to the natural world has been “innate” in her since she was a child. She clarified her beliefs by studying Contemporary Core Shamanism at the Foundation for Shamanic Studies.

Her studies inspire her paintings. She has painted eight Journey series inspired by Joseph Campbell’s look at the world’s mythologies. In her Four Worlds So Far, she painted a series of images across a long scroll that she unwinds while telling the Hopi creation story. “With a good story telling, you’re in another zone,” said Blackwell Rogers. She says audience members are often completely silent during the telling. Sometimes they won’t even blink. “Everybody seems to be able to relate to it in some way,” she said.

Read the rest of the story here.