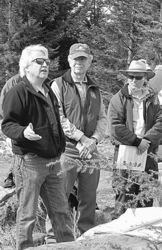 “This kind of cooperative energy is becoming not only more common, but necessary,” says Evan Burks, partnership coordinator for the Monongahela National Forest.

The Barton Bench area refers to a 90-acre parcel of land mined for coal in the 1970s prior to becoming part of the National Forest system. This tract is a portion of the 40,856 acres acquired by the U.S. Forest Service in the late 1980s that has become known as the Mower Tract. The reclamation techniques employed by the coal operators left the area in a less than desirable condition. To ensure stability, soils were heavily compacted, and all disturbances were sowed with aggressive, non-native grass species. After several decades, the area was still covered by only a dense grass mat which has inhibited native species from becoming established. This seemingly permanent condition is referred to as “arrested succession” and can be reversed with human intervention.

The ultimate goal of Barton Bench ecological restoration project is total naturalization. In the short term, the project will provide early successional habitat for wildlife species. In the long-term, restoration will lead to healthy watershed conditions and native red spruce-northern hardwood ecosystem within the project area.

The project kicked off when The Wes-Mon-Ty Resource Conservation and Development Project Inc. and the Monongahela National Forest received a $5,000 Stage I grant and $12,000 Stage II grant through the 2010 FOCUS West Virginia Brownfields program to address barriers to revitalization of Barton Bench Ecological Project Area and plan for marketing implementation.

The Monongahela National Forest then partnered with Appalachian Regional Reforestation Initiative (ARRI) and the Office of Surface Mining Reclamation and Enforcement (OSMRE) to plan the site preparation. A technique known as ‘deep tillage’ was used in the fall of 2010 to decompact soils and prepare the site for planting. This effort grew into more partnerships with the Arbor Day Foundation to fund the purchase of native tree species from Clement’s State Nursery and Alderson Plant Material Center, AmeriCorps NCCC to provide planting labor and finally an agreement with the West Virginia Department of Environmental Protection (WVDEP) to help fund vernal pool creation and wetland redesign.

This project is part of a larger effort to restore red spruce-northern hardwood ecosystems across hundreds of thousands of acres in Central Appalachia known as the Central Appalachian Spruce Restoration Initiative (CASRI).

Read this story at The Inter-Mountain.