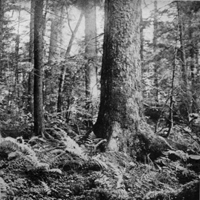 Below is reprinted an article, in part, that appeared in a 1925 issue of The Scientific Monthly.

The romantic story of the “lost tribe” has invariably caught our fancy, in whatever form it has appeared. There is a wistful appeal in the picture of an isolated community, preserving in some forgotten corner of the world the manners and customs of a far distant homeland. The original lost tribes of Israel or the fabled lost” Atlantis,” the realm of Prester John, the imagined but never discovered remnant of the Aztecs in Peru, all these and many others have beguiled us, down to the survival of seventeenth-century England that is found today in the mountains of Kentucky and Arkansas. All unknown to many, we have in this country another lost tribe, a vanishing race, whose romantic history antedates even that of Israel or the lost Atlantis, and which has remained through the centuries, isolated in an alien land, and yet clinging persistently to the characteristics of its own kind hundreds of miles and thousands of years away; The “lost tribe” in this instance is not, however, a kind of men, but a species of tree, or rather two related species, red spruce and Fraser fir, direct descendants of the Canadian spruce and balsam.

When northern America broke from its long sleep under the great blanket of ice, animals found new lairs and plants new habitats. Marked changes in climate had been wrought by the southward movement of the glaciers. There had been a slow southward procession of boreal climatic conditions, which irresistibly set to migrating all species which were able to migrate. Not animals alone, but vegetation as well, had spread southward in advance of the great glacier. Even trees had migrated with the rest, the northern species finding new sites as the warmth-loving southern species were frost killed and driven forth.

In this manner the red spruce came from its home in the north and, well in advance of the last reach of the ice sheet, established itself in the region now covered by the Central Atlantic states. The migration was not confined to spruce alone, for birch, beech, maple and other northern species traveled in the same caravan. All doubtless became well established in this part of the country, until the glacial period came to an end. Then came disaster. In the increasing warmth, the forests of the south must have waged a relentless and successful warfare against their hapless northern rivals. Only those trees and plants could escape that could climb above the altitude limit of the prolific southern vegetation. This the spruce, among others, succeeded in doing, and became accordingly confined in this region to the highest summits and loftiest ridges, where, in the Southern Appalachians, it has persisted all these centuries and is found today.

The range of red spruce is thus decidedly limited, because of the relatively small area that is high enough to reach the bracing coolness and the plenitude of moisture spruce demands. The Southern Appalachians are themselves the remains of a plateau, once higher than the highest of the peaks remaining (6,711 feet). Composed of much soft rock, which weathered away, exposing the harder surfaces to a slower erosion, this plateau gradually lost all identity as such and took the form• of the present mountain range, more than forty of whose peaks rise 6,000 feet and over. At this elevation the temperature is comparable to that of southern New England and the sub-alpine climate of the Rocky Mountains. Because of the greater elevation, however, the atmosphere is much more moist and the rainfall heavier. Here the red spruce has kept its hold, with its more wintry range-mate, Fraser fir. The latter, beginning in the uppermost part of the spruce zone, grows in almost pure stands of small extent, and is the counterpart of the balsam fir of eastern Canada.

Other compatriots of the spruce have also found lodgment, and in the lower part of the spruce belt the hardwoods and hemlock of the north mingle with the hardier species. Here all the vegetation is suggestive of Northern New England and Canada, while the true soil under the trees is covered by a spongy layer of plant remains known as upland peat, sometimes more than a foot in thickness, and frequently as acid as the peat of many of the Coastal Plain swamps.

Successful in its warfare with nature, the spruce in recent years has found certain man-made circumstances too powerful for it. War between nations across the ocean has touched these spruce forests and decimated them, for modern warfare calls for aeroplanes and aeroplanes demand spruce and fir of the splendid quality so often found in these Appalachian stands. War and a growing population in the cities call also for more newspapers, and newsprint takes a heavy toll of spruce, wherever it is available. For these reasons a large portion of these spruce lands has been logged over, involving a great loss in stream flow protection and scenic value, and contributing but an insignificant amount to the nation’s wood supply. What centuries of continuously hostile climatic conditions could not do to dislodge this valuable forest remnant, man has been accomplishing in a short span of years. The Appalachian spruce is vanishing and may well become extinct if man does not repair the destructive work he has started here.

Details of the logging operations that are clearing off these forests will make the situation clearer. A large portion of this region has been logged over, the spruce lands yielding a cut averaging from 18,000 to 30,000 feet to the acre board measure. In these operations the overhead skidder has been used to some extent to get out the material that lay above the logging railroads and at the heads of the flumes. On the steeper slopes dry slides are sometimes used and frequently the pulp-wood bolts are rolled down the steep mountain sides, a process locally known as “ball-hooting.” Frequently, when the saw-timber has been logged from an area, the latter is “wooded,” which means, in ‘local parlance, that it is again cut over, this time for pulpwood. This second cutting removes trees down to about six inches in diameter. The slash left after logging is a fire trap, and the scarlet scourge-the ever-present enemy of young spruce-has taken its toll of the remaining small trees, leaving them as gray sentinels to mark the passing of the present generation. Where logs have been skidded downhill by horses and dragged uphill by the steam skid¬der, rain has within a year started to “gully” the mountain side.

What kind of timber, if any, can be cut from the next generation on such desolated areas? That is the important question which has confronted foresters and, to some extent, timberland owners with reference to the spruce-fir type. The forestry problems of this type are of a very difficult nature, and have called for some of the Appalachian Forest Experiment Station, which the federal government has established in this region.

On the cut-over spruce lands where fire has not burned, the young trees are coming up satisfactorily. These trees were seedlings before the cutting was made. New seedlings, dating since the cutting, have not yet appeared save on the older tracts. Altogether there is enough of this young growth to continue to hold these lands for spruce, if fire does not intervene; but there is not enough to result in fully stocked stands in this tree generation.

Where fire has come, even though only once, the cut-over lands are in a hopeless condition, so far as spruce is concerned. Blackberry and raspberry briars overrun these acres, to be succeeded by fire cherry and yellow birch, which according to count run several thousand an acre and in this region are of no commercial importance. Only occasionally on these burned areas are live young spruce found, and then around springs and seeps, or along streams, where the small advance growth of seedlings and saplings escaped, evidently because the fire was halted or because it was unable to burn the upper Layer of soil where seeds were stored.

All told, it is evident that the amount of new growth is entirely inadequate for a future stand of softwoods on by far the greater number of these spruce burns. If new stands of spruce and fir are to be available within a reasonable time, the slow and expensive method of planting must be adopted.

Most obvious and most important of all is the fact that adequate fire protection must be put in force on this cut-over land; otherwise what is true of these spruce burns will soon be duplicated throughout the length and breadth of the Southern Appalachians. In that event, the cool mountain streams flowing from hidden springs among the spruce-covered rocks, and inviting alike the hydroelectric engineer and the profitable tourist, will cease to flow. Down gullied, barren mountain sides spring torrents will rush, destructive and profitless to any. Throughout the summer no even flow will be preserved; no wheels will be turned; no hiking pleasure-seeker will find here the refreshing invitation that brings him to such regions. With the vanishing spruce, the good that it has done to the mountain communities will vanish with it. Though strayed far from home and though driven to the heights to maintain itself at all, the Appalachian spruce has paid its way these many years, has made itself a good citizen and friend to man. Now, in its direst extremity, turn about is fair play: the perpetuation of the spruce type in the Appalachians is the duty of every human citizen and friend of the forest. As matters stand today, the loss of this tree is far too imminent a possibility.