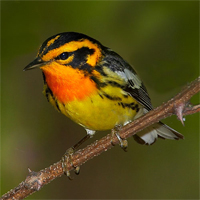 The most distinctive characteristics of the Blackburnian Warbler are its treetop ecology and the breeding male’s color. One of a large genus of morphologically and ecologically similar warblers, the Blackburnian is the only one with orange in its plumage. The male’s striking black-and-orange pattern makes some observers think of a miniature oriole. Its canopy nesting habits have defied many researchers’ efforts to study its breeding ecology. An estimated 57% of its global population nests in Canada’s Boreal region.

In most parts of its breeding range, the Blackburnian Warbler nests in mature coniferous and mixed forest and often occurs in highest densities in old-growth forests. Coniferous trees, whether spruce, balsam fir, pine, or hemlock, are an essential habitat component throughout the species range. At the end of the breeding season, young and adults often leave the conifers to forage in food-rich paper birches. As with other warblers, it may use virtually any woody habitat, and occasionally even herbaceous habitats, during migration. In winter it is found in high-altitude forests, woodlands, plantations, and treed pastures.

The Blackburnian Warbler is primarily insectivorous year-round, though it supplements its diet with fruits in winter and during migration. Caterpillars (including spruce budworm), spiders, beetles, and mayflies are its main prey during the breeding season. It gleans food from small branches (less often from twigs and large branches) and leaf bases, hover-gleans from the undersides of foliage, and occasionally hawks flying insects. It often works its way outward along branches from base to tip, repeating the process on one branch after another. Despite its predilection for conifers when nesting, it forages extensively in nearby deciduous trees when they are available. It tends to forage higher in the canopy than do most co-occurring warbler species, thereby reducing competition; males do much of their foraging between singing bouts in the treetops while females forage closer to the nests somewhat lower. Outside the breeding season, it often joins mixed-species foraging flocks.

The Blackburnian Warbler nests across the southeastern boreal zone from east-central Saskatchewan to the Maritimes, with isolated populations in central Alberta and on the Alberta-Saskatchewan border. It may be extending its breeding range in western Canada. An estimated 57% of its global population nests in Canada’s boreal zone. Its breeding range extends south the length of the Appalachians and into the Great Lakes region. Much of what is known of this species’ nesting ecology is similar to that of its close relatives. It forms seasonally monogamous pairs shortly after arriving on the breeding grounds in April or May; males arrive slightly ahead of females. Males sing from high, exposed perches and while foraging; dawn and dusk songs differ from midday songs. Nests are virtually always placed in conifers, especially hemlocks if available, usually well away from the trunk. As with its foraging behavior, it tends to nest higher than do other warblers, sometimes at heights approaching 80 feet (over 25 m). Often it is the only warbler nesting in the upper canopy. The cup nest of twigs, bark, etc. and lined with lichens, mosses, hair, and other soft materials is believed built only by the female. She lays and incubates three to five (usually four) eggs. The young hatch after about 12-13 days; the nestling period is unknown but probably on the order of ten days. Fledglings stay with their parents for some time after fledging, the family often splitting up after a few days, with some young accompanying each parent. Blackburnian Warblers never attempt more than a single brood in a year.

The Blackburnian Warbler is primarily a nocturnal migrant. Fall and spring migration routes cover the eastern U.S., although spring migration seems to bypass the southeast coast. Migration appears to be fairly direct between the breeding grounds (described above) and the wintering grounds in the highlands of southern Central and northwestern South America, from Costa Rica to Venezuela and Peru. Birds at the western edge of the breeding range fly east before heading south in fall. The breeding grounds are vacated by September and most birds have left the U.S. by October. Peak fall migration dates are late August in central Minnesota and early September in northern West Virginia. Most individuals fly across the Gulf of Mexico but some travel overland along the Caribbean coast of Central America and a few traverse the Caribbean. Northbound in spring, the first birds reach the Gulf Coast in late March, northern states a month later, and Canada shortly thereafter.

The Blackburnian Warbler is one of the few Neotropical migrants that appears to be holding its own. Although there probably was a decline associated with the use of DDT and other pesticides from the 1940s to 1970s, the Breeding Bird Survey has shown a significant overall increase in population since 1966, though too few are recorded to determine local trends in most areas. The trend is significantly positive in the northern spruce-hardwoods region; but there is some cause for concern in the aspen parkland region, where numbers seem to be declining. Further declines throughout the species’ breeding range are anticipated as a result of increased rates of deforestation on the winter grounds in recent years.