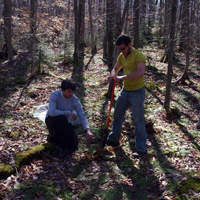 DAVIS, W.Va. — More than 500,000 acres of red spruce forest once shaded the slopes of West Virginia’s higher mountains, providing a cool, moist climate for the creatures living under its canopy.

But as railroad-borne logging crews worked their way into the state’s highlands in the early 20th century, the days became numbered for this nearly unbroken expanse of virgin evergreen forest.

Red spruce was prized for its clear, knotless, straight-grained wood, used in everything from construction beams to soundboards for pianos and the support ribs of the Wright Brothers’ first airplanes.

After virtually all of the red spruce logs had been chopped down and carted off, wildfires spread through the slashings of the decimated conifer stands. Farmers, roadbuilders and developers moved in, fragmenting what was left of the highland forest.

Only about 10 percent of the state’s red spruce forest remains, in a patchwork of stands scattered across the state’s higher elevations.

A coalition of public and private groups is trying to restore the red spruce to its former range by connecting remnant stands across the state’s highlands. Using an army of volunteers and seed stock collected from West Virginia trees, the three-year-old Central Appalachian Spruce Restoration Initiative plans to plant about 35,000 red spruce seedlings in West Virginia by the end of September.

Read the rest of the story  here.