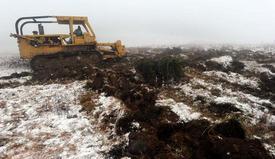 CHEAT BRIDGE, W.Va. — Except for its elevation — high enough to produce snow this week — a reclaimed surface mine on the upper slopes of Cheat Mountain’s 4,429-foot Barton Knob is not much different from scores of other former mine sites scattered across West Virginia.

“After this area was mined in the early 1980s, the coal company did what it was supposed to,” according to regulations and practices in effect at the time, said Shane Jones, an ecologist for the Monongahela National Forest. “It did a good job of keeping the soil on the ground by reclaiming this site to grassland.”

Its topsoil, though, was compacted by heavy machinery during the post-mining re-shaping process. Then, it was seeded with grasses and other ground cover plants that kept native species at bay and produced little organic material to nourish the soil. It could take centuries for the former coal mine to become a part of the surrounding upland hardwood and red spruce forest.

“This land is stagnant,” said Jones. “It’s in what we call a state of arrested succession.” Without intervention, he said, “it could stay like this for hundreds of years.”

The former strip mine is located on land once owned by the Mower Lumber Co. It is part of a 40,000-acre tract of Mower land sold to the Monongahela National Forest in the mid-1980s.

While keeping the old mine site stable is a plus, keeping it stable while improving habitat for wildlife and gradually becoming reforested with native hardwoods and red spruce would be much better, according to a coalition of land management agencies hoping to further reclaim the site.

Read the rest of the story here.