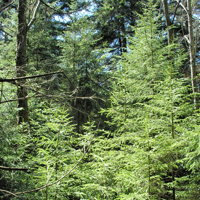 Walking into a red spruce forest can be described as nothing less than enchanting. The thick canopy shades moss-covered rocks that litter the cool, moist forest floor, while providing habitat for a multitude of rare plants and animals. The smell of evergreen needles and sap fills the air, as a Blackburnian warbler sings above. Nearby, a cold mountain stream filled with native brook trout bubbles.

These rare West Virginia forests not only give us refuge on a sunny hike but provide us with a glimpse of West Virginia’s natural history. Virgin red spruce once covered more than 500,000 acres of the mountain landscape here. Unfortunately, aside from Gaudineer Knob and a few other small, isolated stands, most of the red spruce across West Virginia was eliminated during the logging era of the late nineteenth through early twentieth centuries.

In the 1800s, the rapidly expanding nation had a growing need for resources. The rich natural resources found in the central Appalachian Mountains attracted railroads to bring red spruce and other commodities to market. Spruce was particularly valued for constructing fine instruments like fiddles, guitars, and pianos. Due to its light weight and strong unknotted wood, spruce was also sought for ship building. Even the famous Wright Brothers purchased West Virginia red spruce for the construction of their airplanes.

Widespread timber operations removed logs but left behind slash consisting of branches, treetops, and understory shrubs, which dried out after being exposed. Trains used to move the logs were steam powered. Often a cinder from those trains would ignite slash, causing large and intense fires that burned the forests and even ignited the thick humus found in red spruce forests. As the cutting continued, fire followed across high-elevation West Virginia. As a result, areas that were once covered with ecosystems featuring red spruce regenerated into hardwood-dominated forests with little or no spruce habitat for native plants and animals.

Today only about 10 percent of West Virginia’s original red spruce forest remains. The stands are largely fragmented or confined to the high ridge tops of the mountain counties. While spruce trees have been returning, spruce forests that have fully regained their original diversity and suite of ecological attributes remain rare in the Alleghenies.

But now a group of concerned partners is combining efforts to restore red spruce ecosystems on areas where they have disappeared, while protecting and connecting the remaining forest stands.

The Central Appalachian Spruce Restoration Initiative (CASRI) is a partnership of diverse interests with the common goal of restoring historic red spruce ecosystems across the high-elevation landscapes of central Appalachia. CASRI is composed of private, state, federal, and nongovernmental organizations that share a recognition of the importance of this ecosystem for its ecological, aesthetic, recreational, economic, and cultural values.

“CASRI aims to move forest or wetland vegetation and other natural processes back onto a course of development and function that existed prior to the severe logging and associated fires that threw the ecosystem off course,” says Elizabeth Byers, project ecologist with the West Virginia Division of Natural Resources. “Setting our forests back on course not only preserves West Virginia’s native plants but also helps our important wildlife species.”

The West Virginia northern flying squirrel makes its home in the spruce/northern hardwood forests of West Virginia’s mountaintops. In 1985, the squirrel was listed as an endangered subspecies under the federal Endangered Species Act because it was determined to be in danger of becoming extinct. It has since been delisted, but its viability still depends on spruce forests. West Virginia northern flying squirrels feed on fungi found in the soils in red spruce ecosystems. As the squirrels forage, they pick up and disperse the fungal spores and nitrogen-fixing bacteria. The fungi and bacteria help spruce trees grow. In this highly interrelated ecosystem, wildlife, streams, soils, and plant life all benefit one another.

CASRI now believes the unique soil layers may tell us where spruce once existed. “Understanding what happened to the red spruce forests on the Monongahela National Forest can help us understand historic conditions and present population dynamics of specialized and habitat-sensitive animals,” says Shane Jones, Greenbrier District wildlife biologist at the Monongahela National Forest. “It can also help us target areas most conducive to restoration in the future.” Additionally, deep organic soils may be important for storing large amounts of carbon, which is key to mitigating the effects of climate change.

Aside from creating special soil conditions, red spruce forests provide year-round shade to streams, keeping the water temperature lower and creating a great environment for native brook trout. However, it’s not just the streams that are kept cooler by spruce forests. The cooler temperature experienced when walking into a spruce forest in Canaan Valley or the Cranberry Wilderness is especially apparent on hot summer days. Red spruce forests protect the ground from solar radiation that can cause significant watershed water loss.

“As average seasonal temperature and precipitation patterns change over the next 50 years, plants and animals will likely seek refuge in these cooler areas,” says Thomas Minney, Central Appalachian Program director at the West Virginia Chapter of The Nature Conservancy. “Spruce may give plants and animals a better chance of adapting to these climate changes.”

CASRI’s goal is to connect the remaining patches of red spruce ecosystems to create a network of red spruce forests in the mountains of West Virginia, Virginia, North Carolina, and Tennessee, their historic Appalachian range. This network will play a vital role by protecting key remaining red spruce forest areas and giving plants and animals a chance to adapt or migrate in the face of climate change.

Much of the remaining high-elevation spruce ecosystems are located on the Monongahela National Forest and other public lands. However, restoring pieces of spruce ecosystem on private land is essential for connecting habitat. Many private landowners want to help unite these stands to ensure that these forests are healthy. CASRI also helps West Virginia residents complete restoration work on their land.

Rusty Morgan has been planting red spruce on his property in Randolph County for three years now, with the help of funding from the Natural Resources Conservation Service. “The spruce is perfectly suited to our property and historically is what was here,” he says. By planting more than 15,000 trees on his property, Morgan is learning more about the past. “This exciting opportunity is good for our state and good for my family,” says Morgan, who watched his grandson help plant trees this spring.

As CASRI grows, more and more people are becoming interested in red spruce restoration. Members of the Elk Headwaters Watershed Association of Pocahontas County and Timberline Homeowners Association of Tucker County are also planting spruce as part of the CASRI effort.

A very important part of the restoration process is growing native West Virginia plants from local seed sources. As Dave Saville, outreach coordinator for the West Virginia Water Research Institute and a longtime seed collector explains, “Collecting and seed-banking seeds from local trees and other plants associated with the red spruce ecosystem helps us to protect the unique genetic make-up of the red spruce forests in West Virginia.” CASRI has initiated a seed collection program to help grow and preserve native plants.

By the end of 2010, CASRI will have helped plant more than 100,000 spruce trees. The group will also plant black cherry, yellow birch, speckled alder, aspen, and serviceberry trees. All of these native species have benefits for wildlife, including grouse, turkey, black bear, and snowshoe hare.

Evan Burks is the coordinator of the Central Appalachian Spruce Restoration Initiative. He works for the Monongahela National Forest in a position cooperatively supported by the West Virginia Chapter of The Nature Conservancy and the U.S. Fish and Wildlife Service.

Everyone can play a part in preserving this iconic West Virginia forest. For more information about CASRI, or to get involved with restoration activities, contact Evan Burks at 304.637.0160.