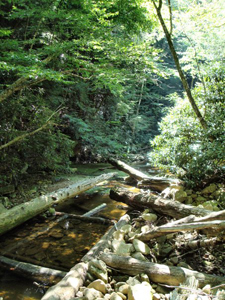 The trail itself took its name from Withrow McClintic, who was responsible for its construction. Withrow was a brother of the present Judge McClintic, judge of the United States District Court for the Southern District of West Virginia. The trail starts from a farm which was then owned by Withrow McClintic and is now owned by his brother, the judge.

Between the years of 1894 and 1900, the Gauley Lumber Company, predecessor of the Cherry River Boom and Lumber Company, began to operate the softwood, spruce and hemlock in the drainage of the Middle Fork of Williams River. Their mill was located at Gauley Mills, approximately one mile above Camden-on-Gauley and there was no mill at Richwood at that time.

The heads of the Gauley Lumber Company figured it would be possible to drive softwood logs down the Williams River to their mill. Stream improvements in the form of splash dams and channel improvements were consequently made and negotiations initiated for the cutting.

Logging on all these operations was done by contract and it was to Withrow McClintic that the contract went to cut and skid 10,000,000 feet of softwood logs from the watershed of the Middle Fork of Williams River to the banks of the stream. The company intended to do its own driving.

Early in the game, it was discovered that the operation was impossible due to the lack of a sufficiently continuous head of water to float out the logs. When this was determined, the company immediately tried to stop Withrow McClintic from cutting more logs. Withrow’s contract, however, had been so cannily written that he could not be stopped. In spite of the obvious futility of the enterprise, he doggedly kept on cutting and skidding and drawing his pay at so much per thousand feet until his contract was entirely filled.

In an effort to stop this wild cutting, the company forbade McClintic to take his supplies over their land up the Middle Fork of Williams River to his camps. It was in reply to this mandate that McClintic built the McClintic Trail from his farm to the site of the aforesaid camps. Due to the impossibility of driving the logs out and the lack of other facilities for getting them to the mill, the entire 10,000,000 feet of logs were lost to the company. Today masses of these logs can be seen scattered along the banks of the Williams River where they have been stranded by high water and only partially rotted away.

After more than forty years the McClintic Trail exists today and can be easily followed through the woods. In only a few spots is it grown up to brush enough to noticeably impede foot travel. Originally, of course, it was constructed for wagon travel. At the halfway point on Black Mountain there formerly existed a house known as the “half-way house” and for many years was kept by two brothers of rather eccentric character who during their residence contributed greatly to the stock of local legends. At the half-way house horses hauling in supplies were put up and rested overnight.

Thus the true history of the McClintic Trail explodes many mythical legends in circulation at the present time. The McClintic Trail was neither an old Indian by-way nor a road traveled by Confederate forces during the Civil War. It was simply a road to waste and heartrending ruin.

R.D. Carpenter, who wrote this for the “Gateway”, the newsletter of the Monongahela National Forest, in 1937 was the Assistant Ranger on the Gauley Ranger District of the Forest. Most of this district is made up of lands of the former Cherry River Boom and Lumber Company purchased in 1933 by the USA in a single tract of 153,000 acres.

Although I have not been able to follow the exact route of the McClintic Trail, I have seen the remains of the piles of logs still, and the remains of a large splash dam on the mainstem of the Middle Fork of the Williams River. Much of the original trail is along the route of the Highlands Scenic Highway and therefore impossible to locate. The Middle Fork of the Williams River lies entirely within the Cranberry Wilderness Area. Photos taken in 2007.