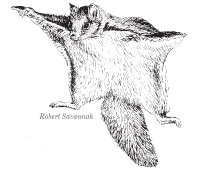 Imagine if small families of mastodons lived in isolated areas on mountaintops. People would think such creatures were very special and that it was remarkable, possibly miraculous, that these animals from ancient times were living in our present age. A subspecies as old as mastodons lives today in isolated clusters atop the central Appalachian Mountains in the highest elevations of West Virginia and adjacent Highland County, Virginia. A relic of former ages when the earth was very different, the West Virginia northern flying squirrel was isolated from the northern flying squirrel species when ice sheets covering North America receded about 10,000 years ago.

West Virginia northern flying squirrels live in high-elevation, spruce-northern hardwood forests of the Allegheny Highlands consisting of red spruce, fir, beech, yellow birch, sugar or red maple, hemlock and black cherry. The squirrel historically lived in the old-growth spruce forests that dominated the highlands until extensive industrial logging decimated this habitat between the 1880s and the 1940s. Even in the wake of this landscape level of habitat loss, West Virginia northern flying squirrels were resilient enough for a few residual populations to survive in small, scattered patches of less than ideal habitat while forests regenerated over the following decades.

In 1985 the West Virginia northern flying squirrel was protected as an endangered subspecies under the Endangered Species Act because it was determined to be in danger of becoming extinct. At that time only 10 squirrels were captured in four separate areas of its range. Today federal and state biologists have captured more than 1,100 squirrels at over 100 sites, and believe that this subspecies no longer faces the threat of extinction.

Small nocturnal animals, West Virginia northern flying squirrels are covered with soft, dense, silky fur that is brownish above and grayish beneath. Individuals are about a foot long, half of which is the broad, flat tail, and weigh less than five ounces. These squirrels glide in the air on the parachute created when they stretch all four legs and pull the loose folds of skin (patagia) between their fore and hind legs taut. Although biologists do not know for sure, females are thought to have one litter of up to four young each year; the expected life span is thought to be about four years. These squirrels seem to live in small groups and commonly share nests. They communicate with high-pitched chirps.

The single most important factor in the squirrels’ population resurgence has been the regeneration of its forested habitat. While that natural regrowth has been ongoing for decades, there is considerable and growing interest by the U.S. Forest Service Monongahela National Forest and Northeastern Research Station, the state of West Virginia Division of Natural Resources, Department of Forestry and State Park commission, The Nature Conservancy and other conservation groups, and private entities to foster large spruce restoration projects that restore the historic red spruce ecosystem of the Allegheny Highlands.

Increased monitoring of West Virginia northern flying squirrels finds them dispersed throughout their historic range, although irregularly and at low densities. It is unlikely that these squirrels will ever be plentiful, but their current numbers are stable, and that, coupled with the increasing acres of maturing forest and the interest in protecting the red spruce ecosystem, creates a favorable forecast for the future of West Virginia northern flying squirrels.