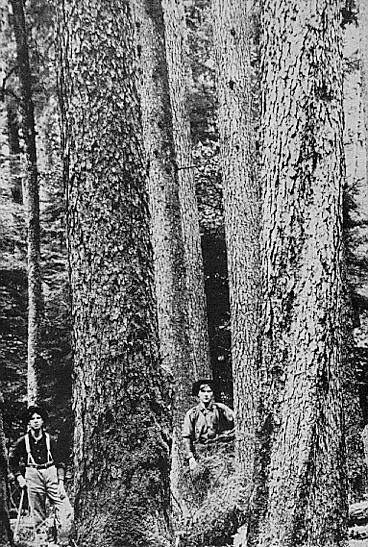 If logging wasn’t enough, the final chapter in the destruction of the Allegheny ecosystem was to be played out by the sterilizing element of fire. The first episode in a long chain of events that led to the complete destruction of the original forest occurred in 1863 when fire escaped from the campfire of Confederate scouts on the Roaring Plains in Randolph County. For many years thereafter, destructive fires swept through the region from the head of the Greenbrier River along the sides and top of Allegheny Mountain through Pendleton, Randolph, Grant and Tucker counties. The slash from the virgin forest (branches, and tree crowns with wood too small to be of marketable use) was extensive. These conditions created a tinder box waiting for a spark.

Consequently, fire followed fire until the remaining green timber and all reproduction were destroyed. This was especially true in the spruce areas, where even the deep humus was burned to bed rock. Many stands of virgin hardwood were not cut, but destroyed by fire spreading from areas of spruce slash into areas of hardwood.

The destruction was extraordinary. More than one-tenth of the whole surface of the state was burned over, including one-fifth of the forest area. Three per cent of the estimated standing timber in West Virginia was destroyed, including the small as well as the large. The amount burned was two-thirds as much as the cut of all the mills in the state in 1907.

As to the origin of the fires, 71% was from locomotives, 20% from saw mills and campers, 3% set to improve the range for livestock, 2% incendiary, and 4% from other causes. The great forest of the Alleghenies was finally destroyed.

Surprisingly, through hook or crook, not every last acre of virgin timber was logged in West Virginia. There are two areas where the original forest stands tall and proud, and both can be easily visited by automobile. Granted these areas are small, but each has an interesting story to tell.

“Some years before the Civil War a speculating land company bought a tract of 69,000 acres on the slope of Shavers Mountain. Their tract fronted for about seven miles along the eastern side of the mountain. To survey and mark their holdings, the company hired a crew of men who must have found rough going in this wilderness. The crew did a good job, but its chief forgot one thing – the fact that a compass needle points to magnetic, not true north. In this area, the angle of declination is about four degrees, a significant source of error on a seven-mile front.”

“An experienced Virginia surveyor, in checking the data, discovered the error, but said nothing about it. Presently however when the sale was being concluded and the deeds recorded, he brought the error to light, and under a sort of “doctrine of vacancy”, claimed the wedge of land left by a corrected survey. His title was established, and he and his heirs found themselves owner of a seven-mile strip of forest, aggregating almost 900 acres. While timber above and below the wedge was cut, this narrow holding was undisturbed.”

The 130-acre Gaudineer Knob Scenic Area tract was eventually purchased at the insistence of former Monongahela National Forest Supervisor Arthur Wood, who believed that future generations should know what an Appalachian spruce stand was like. I have had the pleasure of visiting this area more than once, and you should too. There is feeling in this small stand of huge trees hidden in the midst of the West Virginia mountains that you can not experience anywhere else in the State.

The second area that missed the bite of the lumberman’s saw can be found at Cathedral State Park. The Park encompasses an ancient hemlock forest of majestic proportions – trees up to 90 feet in height and 21 feet in circumference form cloisters in the park. Throughout the woods, the hemlock is the climax species. The park has the distinction of containing the largest hemlock tree in the state.

The woods were preserved because of the love each owner had for this unique area. The land was eventually purchased in 1922 by Mr. Branson Haas, a workman for the Brookside Hotel (which is no longer standing on the site). He sold the woods to the State of West Virginia in 1942 with the stipulation that it remain untouched by ax or saw. On October 6, 1966, Cathedral State Park was entered into the National Registry for Natural History Landmarks, and in 1983 was recognized by the Society of American Forestry in its National Natural Areas Program.

Cathedral State Park is small – just 133 acres – but large enough to get a sense of what the majestic Allegheny forests must have been like before the discovery of man. You can find the park in Preston County on U.S. Route 50, just west of the western Maryland state line. As luck would have it, you can also download a trail map from this page. (PC users can download a selp-expanding “Zip-compressed” version of the TRAIL MAP 559K. If you’re a MacIntosh user, you’ll need to download the Stuffit Expander first, then download this non-executable ZIP FILE (543K). The zip file contains a TIF image of the map at a resolution suitable for printing.)

For those more interested in the railroading aspect of the logging effort, the state of West Virginia operates the Cass Scenic Railroad State Park located in Cass, West Virginia. The railroad offers both eight-mile (1-1/2 hour) and 22-mile (4-1/2 hour) trips scheduled daily June through August. Special fall foliage schedules are offered September through October.

The history of the railroad is interesting. It was originally constructed in 1902 by the West Virginia Spruce Lumber Company to remove timber from the Shaver’s Fork region of Monongahela National Forest. In 1910, it was sold to the West Virginia Pulp and Paper Company, who in turn sold it to Mower Lumber Company in 1942. Faced with dwindling timber supplies, the operation folded in 1960.

It was left to an impassioned plea by Mrs. Russel Baum of Sunbury, Pennsylvania to convince the West Virginia Legislature to purchase the remaining tracks and three remaining engines as a tourist attraction. In 1961, the Legislature appropriated $150,000 to make the purchase. Since that time, the line has been extended from 7 to 22 miles.

If you’re interested in getting a true feeling of traveling the West Virginia mountains in an authentic logging train pulled by a genuine Shay engine, call the Cass Scenic Railroad State Park at 304-456-4300 for more information. In 1995, tickets ranged from $10 to $15 for adults, and $6 to $9 for children. Be sure to ask the park about the Saturday night barbecue Dinner Train rides, and the “Halloween Train”.

And logging continues today. Available to individuals and groups, this new industry tour offered by the Beckwith Lumber Company provides an educational opportunity for visitors. The timber industry still plays a large role in the economy of many mountainous counties in West Virginia, and these tours educate participants on all aspects of the timber industry. Beckwith Lumber Company is located on Rt. 219 in Slaty Fork. Tours are on weekends only, and advance notice is required. Call 304-572-1220 for more information.

Books and other Historical Publications of Interest

Nearly all the source material used to develop this write-up was drawn from an extraordinary book entitled Tumult on the Mountain written by Roy B. Clarkson. I have presented only a “taste” of what this book has to offer in the way of information and pictures. If you’re interested in getting the entire picture of the logging in the West Virginia mountains – camp life, locomotives, the people, the companies, logging techniques, and even a map of the rail lines, then there is no better book to own. Clarkson has done his research, and presents this information in a lively, informative, and entertaining manner. I would rate this book as a “must own” for any backpacker or hiker who regularly visits the recovering forests of the Monongahela National Forest.

A second book that will also be of great interest to outdoorsmen is The Last Forest, written by G.D. McNeill. The Last Forest takes you back in time to the 1880’s to the unspoiled Cranberry Wilderness Area before the logging clear-cut the magnificent hemlock from this region. The book closes fifty years later, with the last virgin forest cut over and despoiled. The book also includes tales of local events, providing more of a “resident’s” view of the logging effort and life in the mountains at the turn of the century. Formerly out of print for over half a century, this book is now back in publication and available for sale.

A third book takes you north to the Blackwater Falls region. Beginning with a look at the past and the exploits of Porte Crayon and others, Blackwater Country written by J. Lawrence Smith deals with many of the scenic and natural wonders of the Blackwater Falls- Canaan Valley area.

These three books, as well as MANY others dealing with life in West Virginia can be purchased from the McClain Printing Company, 212 Main Street, Parsons, West Virginia 26287. Call 304-478-2881 to request a catalog of their extensive line of historic, cultural, and general interest books written by authors of the Mountain State.

The information contained in this write-up is copyrighted by the following: Andy Hiltz, McClain Publishing Company, Pocahontas County Tourism Commission, and Seneca Books.